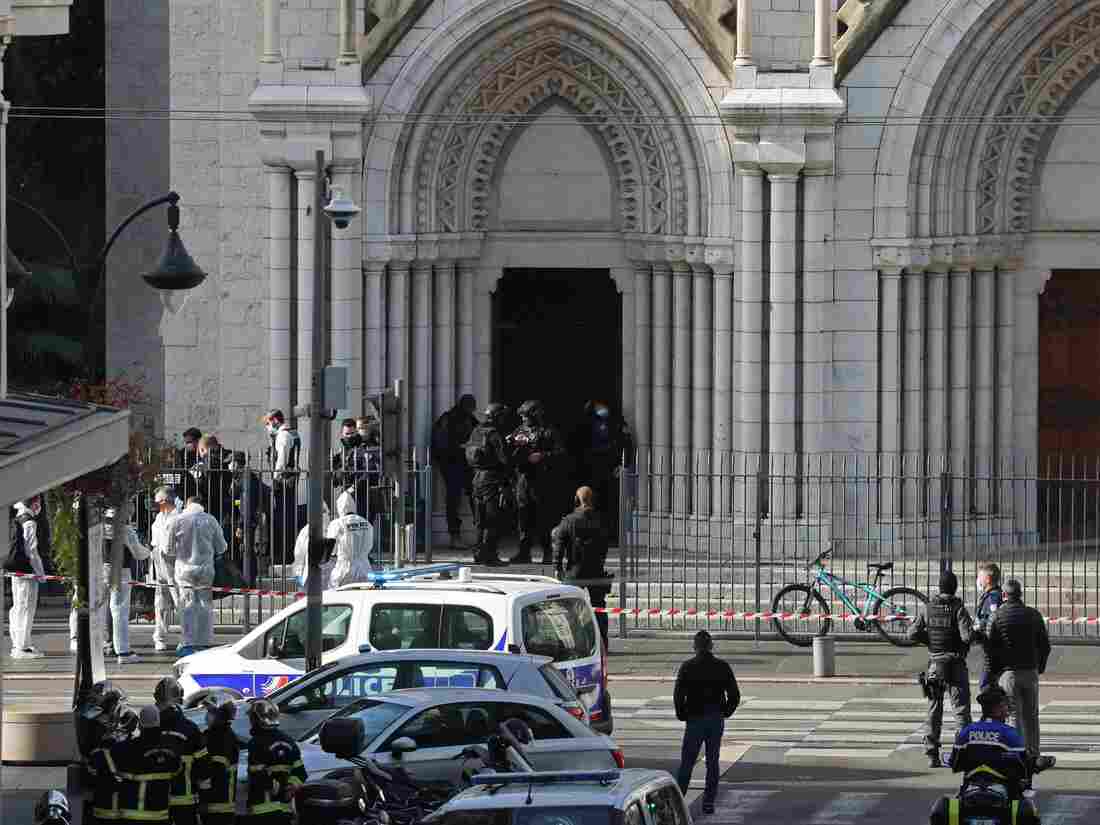 Members of a French elite tactical police unit search the Notre Dame Basilica in Nice after a knife attack that killed three people and injured several others on Thursday. 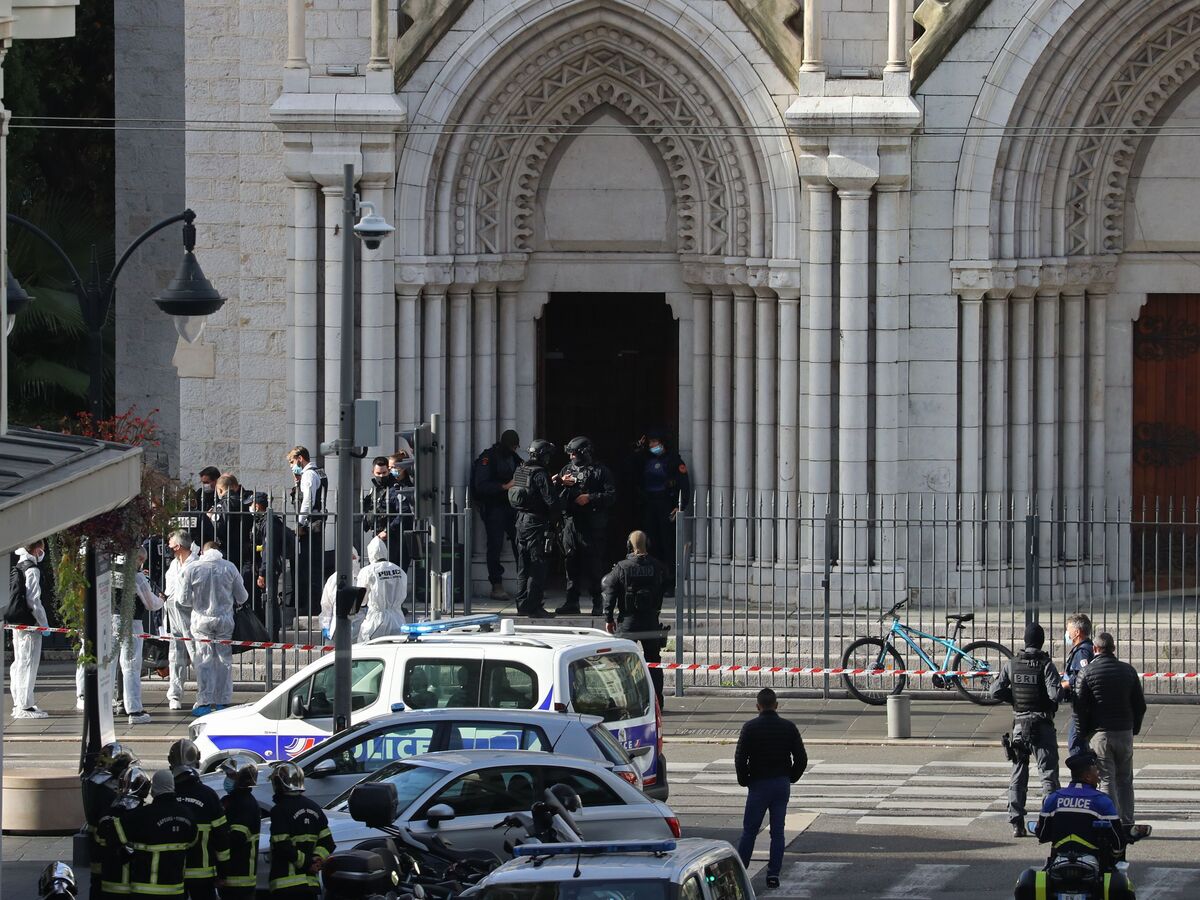 Members of a French elite tactical police unit search the Notre Dame Basilica in Nice after a knife attack that killed three people and injured several others on Thursday.

A man used a knife to attack people at the Notre Dame Basilica in Nice, France, Thursday, killing three people, authorities say. Several more were injured. Police have arrested a suspect, according to Mayor Christian Estrosi.

Two people were killed inside the church, and another died outside it, according to local media reports.

The attack took place around 9 a.m. local time. The mayor said those who died include a woman and a man who worked at the church as its sacristan, a nonclergy member of the staff. More information about the victims has been slow to emerge, after a massive police response closed off the area to focus on securing the church and investigating the shocking crime.

“I send all my support and all my compassion to the families of the victims of this barbarian,” Estrosi said.

French President Emmanuel Macron arrived in Nice on Thursday, after speaking to Estrosi by phone earlier.

“The attacker kept repeating ‘Allahu Akbar’ (God is Great) even while under medication,” Estrosi said in a media briefing outside the church, according to Radio France Internationale.

The mayor also criticized France’s laws, saying they’re not sufficient to deal with what he called “Islamo-fascism.”

The French government has raised its Vigipirate security alert system to emergency levels across the country, Prime Minister Jean Castex announced after the attack.

“We are in mourning,” the church said in a statement.

“My sadness is infinite as a human in front of what other beings, called humans, can commit,” Monsignor André Marceau said. “At this moment, all the churches of Nice are closed until further notice, and placed under police protection.”

Other alarming incidents were also reported on Thursday. In Lyon, police arrested a man carrying a knife near a large train station. In Saudi Arabia, the French embassy said a man wielding a knife attacked a guard at its consulate in Jeddah. The man was arrested, and the guard was reportedly not badly injured.

And in Avignon, police reportedly shot and killed an armed man after he threatened them in the street – although authorities say that case seems to be unrelated to the attack in Nice.

“The knife attack comes two weeks to the day of the beheading of a French schoolteacher in a town north of Paris,” NPR’s Eleanor Beardsley reports from Paris. “The killer in that attack was shot dead by police. He was an 18-year-old radicalized Chechen refugee who was angry that the teacher had shown caricatures of the Prophet Muhammad in his class on freedom of speech.”

The attack in Nice took place on the day many Muslims celebrate the anniversary of Muhammad’s birth.

The caricatures were originally published by the satirical magazine Charlie Hebdo, which announced last month that it would reprint cartoons of Muhammad that are believed to have sparked a deadly attack on the magazine’s offices in 2015. The re-run was timed to coincide with the start of a trial related to the attack.

“We will continue, Professor,” Macron said earlier this month, referring to the slain teacher, Samuel Paty. “We will defend the freedom that you taught so well and we will promote secularism, we will not renounce caricatures, drawings, even if others retreat.”

After Paty’s killing, Macron and other French officials insisted the drawings of Muhammad should be seen, despite the view held by many Muslims that depicting the prophet in any way is a form of blasphemy. Images of the cartoons were “widely displayed at marches in solidarity with the killed teacher,” France 24 reports.

France’s high-profile stance sparked outrage in parts of the Muslim world, setting off a diplomatic feud between France and Turkey.

Turkey’s government condemned the attack, with İsmail Hakkı Musa, Turkey’s ambassador to France, calling it an odious act of terrorism committed through cowardice.

Tensions in France also include a debate over BarakaCity, a Muslim association that the government ordered dissolved on Wednesday.

After Thursday’s attack, BarakaCity issued a statement saying it is “horrified” by the violence, expressing its support for the victims.

This is a developing story. Some things that get reported by the media will later turn out to be wrong. We will focus on reports from police officials and other authorities, credible news outlets and reporters who are at the scene. We will update as the situation develops.