Scientists have discovered new details about a hellish lava planet light-years away from Earth that is unbearably hot, rains rocks and has lava oceans more than 60 miles deep.

The exoplanet, meaning it is outside our solar system, hosts one of the most “extreme” environments discovered, according to a study first published in Monthly Notices of the Royal Astronomical Society by scientists from McGill University in Montreal, York University in Toronto and the Indian Institute of Science Education and Research in India. 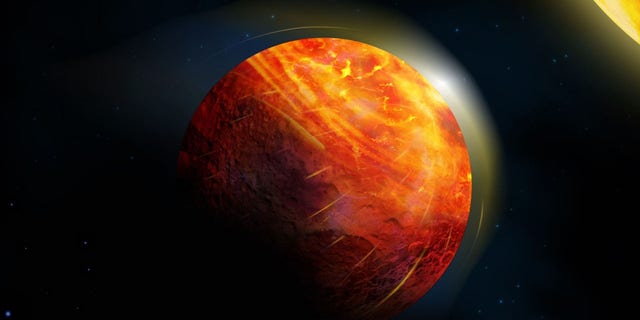 Artist’s impression of the lava planet K2-141b. At the center of the large illuminated region there is an ocean of molten rock overlain by an atmosphere of rock vapour. Supersonic winds blow towards the frigid and airless nightside, condensing into rock rain and snow, which sluggishly flow back to the hottest region of the magma ocean.
(Julie Roussy, McGill Graphic Design and Getty Images )

“Among the most extreme planets discovered beyond the edges of our solar system are lava planets,” McGill explained in a press release, “fiery hot worlds that circle so close to their host star that some regions are likely oceans of molten lava.”

Neptune has the highest wind speeds of any planet in our solar system, which can exceed 1,100 mph – 1.5 times the speed of sound, according to NASA.

The planet’s surface, atmosphere and ocean all appear to be made of rocks and the “extreme weather forecasted by their analysis could permanently change the surface and atmosphere of K2-141b over time,” the McGill release said.

“The study is the first to make predictions about weather conditions on K2-141b that can be detected from hundreds of light years away with next-generation telescopes such as the James Webb Space Telescope,” lead author Giang Nguyen, a PhD student at York University who worked under the supervision of McGill University Professor Nicolas Cowan on the study, said.

More than half of the planet also has constant daylight because it’s so close to its host star that it’s “gravitationally locked in place,” and the same side always faces the star.

The dark side of the planet, alternatively, has tempetures that can go lower than -300 degrees Fahrenheit.

The lowest temperature ever recorded by a weather station on Earth was -128 degrees in the Antarctic near the South Pole in 1983, according to the American Geophysical Union.

In the same way water on earth evaporates into the atmosphere and returns as rain, the planet’s rock vapor atmosphere evaporates and rains down as rocks.

“On K2-141b, the mineral vapour formed by evaporated rock is swept to the frigid night side by supersonic winds and rocks ‘rain’ back down into a magma ocean,” the release said. “The resulting currents flow back to the hot day side of the exoplanet, where rock evaporates once more.”

“All rocky planets­, including Earth, started off as molten worlds but then rapidly cooled and solidified. Lava planets give us a rare glimpse at this stage of planetary evolution,” says Professor Cowan of the Department of Earth and Planetary Sciences.