In a throwback to the first SNL after the election of 2016, the skit saw Alec Baldwin’s Donald Trump give a concession serenade, kind of. But that all came after Jim Carrey’s Joe Biden and Maya Rudolph’s Kamala Harris gave their victory speeches, with a bold swipe at The Police’s easily mockable frontman

As Biden again this season, The Cable Guy actor joked that the end of the near week long wait for a final result in the election was “having sex with Sting: What a release, man.” 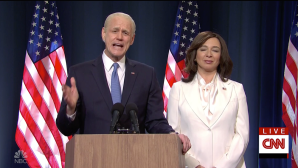 Riffing off the real-life Biden’s remarks tonight, the SNL Biden promised unity and to be POTUS “for all Americans whether you’re from a liberal state like California or a conservative state like Oklahoma or a cracked-out mess like Florida.” Then Rudolph was out in front of the camera in her Emmy winning performance as Harris, dressed in Suffragette homage white, like the real Senator from California was tonight – though she may not have cut a rug like Carrey and Rudolph.

Joe Biden Pledges To Be A President Who ‘Will Not Seek To Divide, But Unify’ In Victory Speech After Winning White House

Listing off the barriers that the real-life Harris has shattered as the first woman and first woman or color to be VP-elect, Rudolph deadpanned – “If any of that terrifies you, I don’t give a funt.”

But, as Beck Bennett’s Wolf Blitzer said “people don’t just want to see Biden and Kamala happy, they want to see Trump sad,” the real showstopper was to come.

“As anyone who died halfway through Tuesday knows, I was re-elected President of the United States, but of course they are trying to steal the election away from me,” Baldwin said in one of his last stints as Trump.

Then Baldwin’s Trump went over to a piano and delivered a wonderfully stumbling version of the Village People’s “Macho Man.”

“This isn’t goodbye, America. I’m just going to say, ‘See you in court”

Then it was back to Carrey’s Biden and Rudolph’s Harris calling out Trump as the loser he really is.

With Election Night inconclusive, SNL undoubtedly had a series of scripts on the shelf for tonight based on whatever scenario ended up becoming reality. Reality was made clear this morning when multiple networks and the AP called Pennsylvania and its vital 20 electoral votes for Biden.

That pushed the former VP up over the necessary 270 electoral votes and changed his and running mate Harris’ titles to President-elect and Vice President-elect. Trump being Trump, the petulant incumbent is refusing to concede, insisting that he is the winner and will take everyone and their dog to court to make it so – which is a tragic comedy all its own that tonight deftly amplified.

As the Lorne Michaels-run late night show prepares to go on a short Season 46 hiatus, tonight’s show also sees the return of Dave Chappelle as host. As a bookend of sorts to the Trump era, the last time the Mark Twain Award winner fronted SNL was the weekend after the Celebrity Apprentice host was elected over Hillary Clinton.

On that November 12, 2016 show, the cold opener was fittingly Kate McKinnon’s Clinton at a piano performing a somber version of the already very somber “Hallelujah” by Leonard Cohen. At the end the acclaimed cast member said to camera “I’m not giving up and neither should you” – as you can enjoy below:

Clearly always going full Biden tonight, SNL teased out a glimpse of the Sunshine of the Endless Mind star transforming into the newly minted POTUS-elect: