Police in the western German town said on Twitter Tuesday that people should “avoid the area,” adding that “police as well as other emergency services are on the scene.” The force did not provide more specific numbers of dead and injured.

Officers have arrested the driver of the car, a 51-year-old male, who is from the Trier-Saarburg area. The man is a German national. Trier police said they did not yet know why the incident had happened, or whether the man was under the influence of alcohol or drugs.

The vehicle has also been secured, Trier police added. A spokesperson told CNN that officers were not seeking anyone else in Trier in connection with the incident. 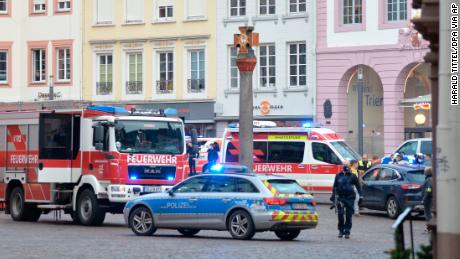 “The care of the injured has absolute priority,” the force tweeted.

“What happened in #Trier is shocking,” German government spokesman Steffen Seibert tweeted after the incident.

He added that his “thoughts are with the relatives of the dead, with the numerous injured and with everyone who is currently on duty to care for those affected.”

State police in western Germany’s Rhineland-Palatinate, where Trier is located, asked people to not spread disinformation, in a Twitter post.